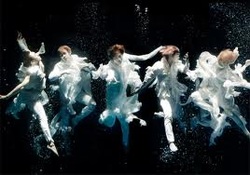 MBLAQ in 2011
MBLAQ returned to the music scene in January 2011. MBLAQ participated in the production of BLAQ Style, with Seungho composing and playing the piano for the introductory track "Sad Memories" and Mir writing the rap lyrics for "You're my +".
On January 3, 2011, J.Tune Camp released MBLAQ's music video for "Cry" on Youtube, an R&B track produced by E-Tribe. The video gained more than 500,000 views within a week. J.Tune Camp announced that MBLAQ would be debuting in Japan in May, signing with Sony Music Japan.
On January 10, 2011, MBLAQ released their first studio album, BLAQ Style. After only one day of the album's release, MBLAQ recorded 25,000 orders for BLAQ Style. The next day J.Tune Camp released the full music video for Stay on Youtube, which gained more than 400,000 in a week. On January 13, MBLAQ performed on M! Countdown, followed by performances on the 14th, 15th and 16th at Music Bank, Music Core, and Inkigayo respectively.
MBLAQ were named Artist of the Month by MTV Korea for the month of February. They then released a repackaged version of their studio album, titled BLAQ Style - 3D Edition on February 22, 2011. The album consists of the 13 tracks from BLAQ Style, as well as three new tracks. Two of the three new tracks included MBLAQ's participation in its production. The track "돌아올 수 없는 (Can't Come Back)" was composed by G.O and the lyrics were written by both G.O and Mir, while the song titled "You" was written and composed by Thunder. When it was released, BLAQ Style 3D reached number one on the Hanteo charts. "Again", their last new song from BLAQ Style - 3D Edition, was used to promote The Fighter in South Korea.
BLAQ Style 3D was released in Taiwan as a licensed album on the March 18, 2011, and reached the number one spot from March 18 to 24 on Taiwan's G-Music chart under the K-pop and J-popcategory without any promotions.
MBLAQ released their Japanese album on May 4, 2011, with live performances held at Osaka, Sapporo, Nagoya, Fukuoka, and Tokyo. "Your Luv", released on April 19, was ranked first for four consecutive days on Recochoku. MBLAQ were also placed first on the Cellphone Message Music Video chart.
On May 3, MBLAQ kicked off their Japanese promotions with their debut event held at Kanagawa Lazona Kawasaki Plaza, gathering a reported 10,000 fans. They performed "Oh Yeah", "Your Luv" and Daijoubu and more than 4,000 CDs were sold during the event. Your Luv reached second position on the Oricon Daily Charts for May 3, which was before their official Japanese debut and release date. On May 4, Your Luv reached first position on the Oricon Daily Charts, selling more than 11,000 CDs. A week after their debut, MBLAQ reached second position on the Oricon Weekly Charts, selling more than 40,000 copies of Your Luv.
The mini-album Mona Lisa was released online in July 2011.. On July 14, MBLAQ returned to the stage on Mnet's M! Countdown, followed by performances on the 15th, 16th and 17th at KBS'sMusic Bank, MBC's Music Core, On July 15, when Mona Lisa was released in stores, it reached number one on the Hanteo Real-time, Daily and Weekly Charts.
On July 15, J.Tune Camp stated that since July 8, Mona Lisa had 30,000 pre-orders, with international fans, in particular Japanese fans, requesting more copies. J.Tune Camp stated they would be producing 50,000 more copies to meet the demand.
In September, MBLAQ reached the number one position on German music website Viva with their "Mona Lisa" music video by garnering 111,000 views. MBLAQ's "Mona Lisa" had topped Bulgaria's Popcore TV chart for sixty eight consecutive days thus far.
The title track, "Baby U", of their new single album was released on October 26, 2011. Baby U! reached number two on the Oricon Daily Chart on its release date, selling more than 22,000 copies. As part of their promotions, MBLAQ travelled to Nagoya, Japan on October 28, Osaka on the 29th, and Tokyo on the 30th to celebrate the release of their new single. On October 30, 1,500 fans were chosen by a lottery among the 12,500 people who gathered at the venue to join the LIVE performance and Great Bingo Tournament. On the final day, 23,000 fans gathered for a special 'High five' event, as well as performances. Baby U! reached number two on the Oricon Weekly Chart, selling a total of 45,624 copies in the first week. The song also reached number one on Japan's Billboard Hot Animation Chart.